Sorry for being M.I.A. lately. Long story! Regardless, since this is one of the last weekends that you will be able to get tomatoes at the farmer's market and off your tomato plants (at least here in Niagara), I though I would show you how Trevor and I freeze our tomatoes for sauce.

But first a little garden story: When Trevor and I bought this house, one of the first things we did was start to plan out the garden. I went online to Johnny's Select Seeds and onto Salt Spring Seeds and went crazy! I just love growing plants from seed. It is very satisfying knowing that your tender loving care is what produced such a bounty of food in such a short time! Even better than that, I like growing heirloom varieties that no one else really grows.

This is especially true with tomatoes. Did you know that you can grow tomatoes that are red, green, yellow, orange, pink, white, purple, brown/black, striped, in husks, marble-sized, softball-sized, pepper-shaped, pear-shaped, smooth, bumpy, and everything in between? This means that I have lots of variety to choose from each year. (Next year? Yes, please!)

This year we chose three varieties: black cherry, wild, and riesetomate, which is my favourite, because it looks weird.

We ended up with ten plants in the ground between the three varieties. Then, Trevor's tutor family gave him two giant flats of tomato plants (!!!). So, we dug a giant hole in the ground, planted ten more and put the rest in pots. The ones in pots sadly, did not do as well as the others (mostly because I tend to forget to water, and it was smokin' hot this summer), but the ones in the ground did great! Check out this one day's bounty:

We did not know what variety the plants that were given to us. My best guess is some saladette, some beefsteak, some roma, and some san marzano. Regardless, that means we had a garden, almost exclusively, of a lot of tomatoes! And anyone who has a few tomato plants knows that tomatoes don't always turn at the same time. So instead of canning them, we decided to freeze our tomatoes in a way that they would just need a little cooking down before becoming sauce.

I will warn you if you wish to give it a try: this is messy. And rewarding!

First get out your tomatoes! It is okay if they are a little green, or have yucky (not moldy), parts on them: you can cut them off. You don't want them to be too ripe and mushy (firm is good). 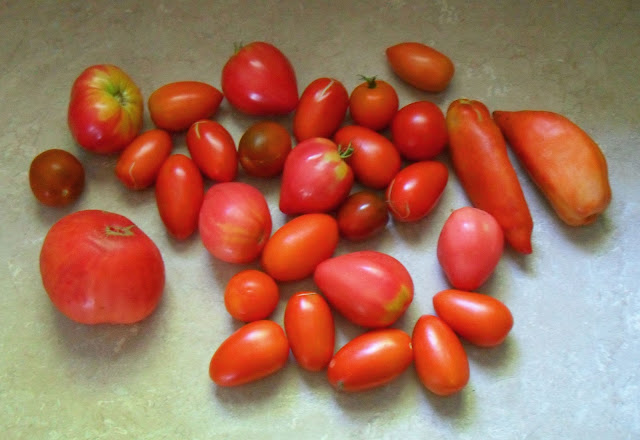 The next thing you have to do is give all your tomatoes two slices in the shape of an X on the "bum end" of the tomato. Make sure it is as shallow as you can get it. The aim is to pierce the skin. 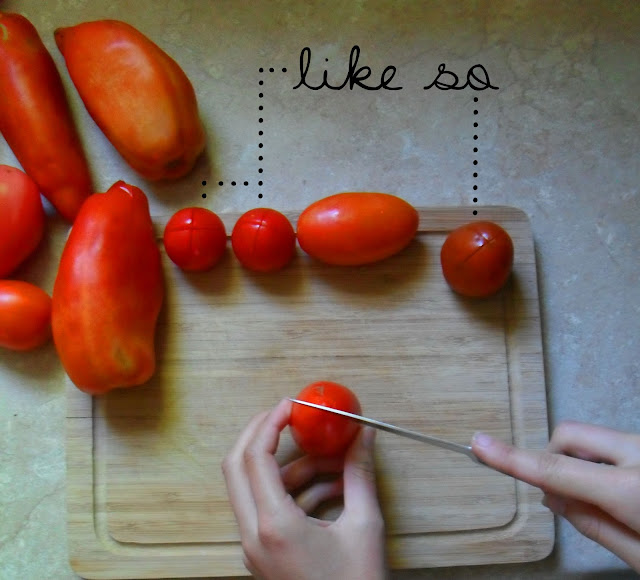 Once all your tomatoes are ready and pierced, you need a large pot of boiling water, a pot of ice water (we just used super cold water, we had no ice), and something to move the tomatoes out of the hot into the cold. Place a few tomatoes at a time into the boiling water. 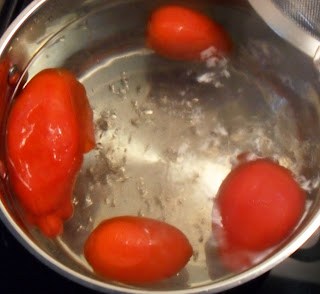 They will only need to be in there for about one minute. If you notice that the skin is already coming off, like the big tomato in the photo above, it is definitely ready! Next, transfer the tomatoes into the ice water to stop the cooking and get the next batch of tomatoes into the boiling water as you work. 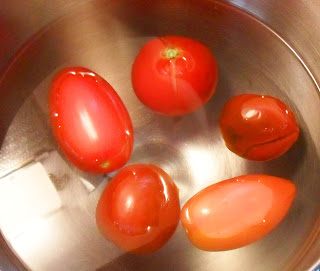 After about a minute or two, you can take the tomatoes out of the ice water and peel the skins off. You can discard the skins. Once peeled, cut out any of the aforementioned "yucky" spots, and slice in half. 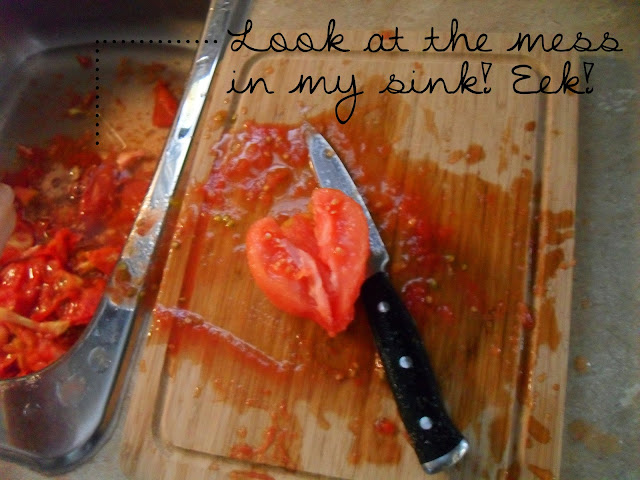 Finally, SQUEEZE out the seeds, toss the "goods" into a strainer, and once you are finished all the tomatoes, take the tomatoes from the strainer and place into some freezer bags. Try to get out as much air as possible. 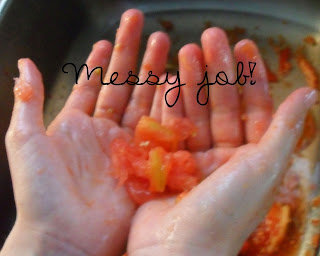 Enjoy on a cold winter's night!

Special thanks to the guide on Pick Your Own for getting us through the first time!

[powered by: Attack of the Killer Tomatoes]